The Artists of Knox County

Knox County has produced quite a few outstanding artists over its long history, and many of their works are on display at our Museum. 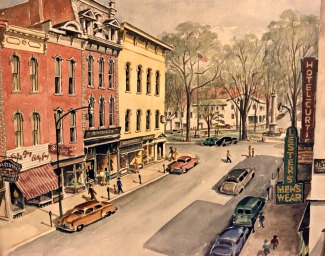 In the 1940’s and ‘50’s, Vernon Johnson produced more than 50 water color paintings of our beautiful homes, buildings, businesses, fairgrounds, and other scenes in the area, with twelve of these now in our Museum collection.
During his years here as a graphic designer at the Shellmar Corporation, Johnson preserved in his work the look and feel of our community as representative of small-town America in the middle of the twentieth century.
Johnson's daughter, Janis, has recounted the story of her father's life and art in her recent beautiful book, The Artist's Eye, which is available for purchase at our Museum Shoppe.

In the early 1900’s, Kenyon graduate Coles Phillips went on to become one of America’s well-known illustrators. Phillips created many illustrations for Kenyon yearbooks and other publications during his student days from 1900-1904. Soon after, he created his original "fadeaway" style which worked so well in his commercial illustrations of elegant "flappers" seated on automobiles or furniture of the 1920's.
His magazine covers and advertising designs for The Saturday Evening Post, Woman’s Home Companion, and other prominent magazines became quite popular and are becoming increasingly collectible today.

Daniel McDowell became nationally well known in the 1860's for his various treatments of sliced watermelons.

More recently, Gail Peelman became best known for her excellent sketches of historic buildings, homes and related scenes, such as the Civil War Monument on our Public Square.

Winnifred Sturtevant has done beautiful stenciling, reverse painting and gold leaf work on furniture, mirrors clocks and trays, and several of her pieces can be found among our displays.

And works by Ruth Bemis, Kathleen Selsam, John Wilson, Bob Foster, Irene and Mark Kinney, Ernest Ollis and many others can be seen among our rotating displays of our area artists.