Christ Church at the Quarry 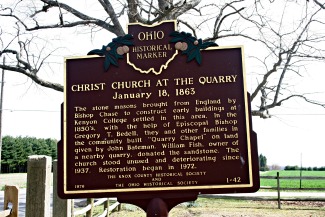 Knox County's first official Historic Marker was approved and erected in 1976 to commemorate the restoration of the Christ Church at the Quarry, near Gambier, Ohio. The project had been conducted by the "Quarry Chapel Group," a committee of the then recently reenergized Knox County Historical Society of the 1970's. It is thus designated as #1-42, as Knox County stands 42nd alphabetically among Ohio's 88 counties.

The text on the Marker is the same on both sides, and reads:

"The stone masons brought from England by Bishop Chase to construct early buildings at Kenyon College settled in this area. In the 1850's with the help of Episcopal Bishop Gregory T. Bedell, they and other families in the community built 'Quarry Chapel' on land given by John Bateman. William Fish, owner of a nearby quarry, donated the sandstone. The church stood unused and deteriorating since 1937. Restoration began in 1972."

The Marker is located at the SW corner of Quarry Chapel Road and Monroe Mills Road.
The address is

The Marker was sponsored in 1976 by