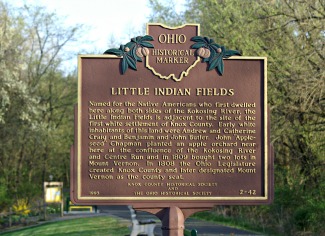 Our second Historic Marker, #2-42, commemorates the site of a native American gathering place and the first pioneer settlement in Knox County, known as "Little Indian Fields."

Veteran members of the Historical Society may remember the lengthy and numerous conversations between our then KCHS president, Rev. Robert Clarke, and Ohio Historical Society personnel involving everything from minute fact-checking details to grammatical disputes in the wording of this Marker. Board Members referred to it as "the ongoing saga," and the Reverend Clarke was most pleased when the finished Marker was installed at the Kolosing Gap Trail in 1993.

Some years later the Marker was struck by an unknown vehicle and bent nearly in half, but was repaired to its original beauty by Bike Trail personnel at no cost.

It is still one of our favorites, and we think of The Good Reverend each time we pass by on the trail.

The Marker is located at the intersection of Mount Vernon Avenue and Lower Gambier Rd., next to the parking lot at the Kokosing Gap Trail.

The text on both sides reads:

"Named for the Native Americans who first dwelled here along both sides of the Kokosing River, the Little Indian Fields is adjacent to the site of the first white settlement of Knox County. Early white inhabitants of this land were Andrew and Catherine Craig and Benjamin and John Butler. John "Appleseed" Chapman planted an apple orchard near here at the confluence of the Kokosing River and Centre Run and in 1809 bought two lots in Mount Vernon. In 1808 the Ohio Legislature created Knox County and later designated Mount Vernon as the county seat."