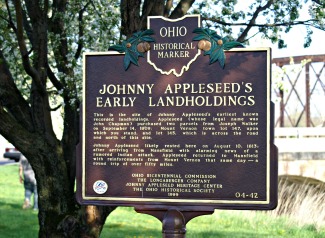 John Chapman, better known as Johnny Appleseed, spent a good deal of time in and around Knox County from the early days of Ohio's statehood until about 1828, when he moved on further west.

We still mark the spot where he once owned two prime lots next to the Kokosing River in downtown Mount Vernon.

There was great excitement in the summer of 1999 when we dedicated Historic Marker #4-42, commemorating the early landholdings of Johnny Appleseed in Knox County.

Bands played and school children sang as we waited for the arrival of relay runners who were reenacting Johnny's famous 1813 run from Mansfield to Mount Vernon to bring back Knox County militiamen for the protection of Mansfield's residents, then huddling in their blockhouse, expecting an attack by angry Native Americans.

Both sides of the Marker read:

"This is the site of Johnny Appleseed's earliest known recorded landholdings. Appleseed (whose legal name was John Chapman) purchased two parcels from Joseph Walker on September 14, 1809: Mount Vernon town lot 147, upon which you stand, and lot 145, which is across the road and north of this site.

Johnny Appleseed likely rested here on August 10, 1813, after arriving from Mansfield with alarming news of a rumored Indian attack. Appleseed returned to Mansfield with reinforcements from Mount Vernon that same day -- a round trip of over fifty miles."

The Marker is located at the northside bank of the Kokosing River, just west of South Main Street,between South Mulberry St. and South Main on the short connecting street called Phillips Drive.