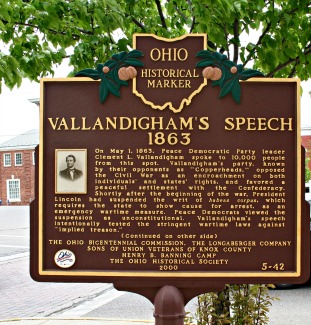 Even today, it is hard to imagine 10,000 folks gathering on Mount Vernon's Public Square to listen attentively for two hours or more to an energized political speaker.
But gather they did to hear a speech that we remember today as an important benchmark event in America's Civil War story.

Marker #5-42 was dedicated in the year 2000 with comments by Lorle Porter and James Gibson, as well as the reenacted speech of Mr. Vallandigham. Not everyone in attendance was happy with the recognition given to the Peace Democrats' point of view.

It took both sides of the Marker to properly tell the Vallandigham story:

"On May 1, 1863, Peace Democratic Party leader Clement L. Vallandigham spoke to 10,000 people from this spot. Vallandigham's party, known by their opponents as "Copperheads," opposed the Civil War as an encroachment on both individuals' and states' rights, and favored a peaceful settlement with the Confederacy. Shortly after the beginning of the war, President Lincoln had suspended the writ of habeas corpus, which requires the state to show cause for arrest, as an emergency wartime measure. Peace Democrats viewed the suspension as unconstitutional. Vallandigham's speech intentionally tested the stringent wartime laws against 'implied treason.' (continued on other side)" 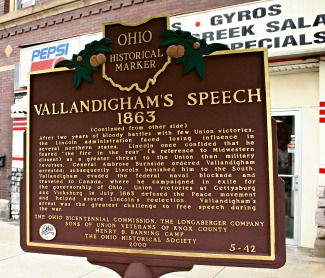 "(continued from other side)
After two years of bloody battles with few Union victories, the Lincoln administration faced losing influence in several northern states. Lincoln once confided that he feared "the fire in the rear" (a reference to Midwestern dissent) as a greater threat to the Union than military reverses. General Ambrose Burnside ordered Vallandigham arrested; subsequently Lincoln banished him to the South. Vallandigham evaded the federal naval blockade and traveled to Canada, where he campaigned in exile for the governorship of Ohio. Union victories at Gettysburg and Vicksburg in July 1863 defused the Peace movement and helped assure Lincoln's reelection. Vallandigham's arrest was the greatest challenge to free speech during the war."

The Marker is located on the northwest corner of Mount Vernon's Public Square, at