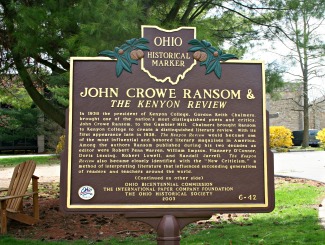 One of America's outstanding writers was recognized in 2003 for his years in residence at Kenyon College.

The two sides of Marker #6-42 recount the literary contributions of one of Kenyon College's best-known writers.

'In 1938 the president of Kenyon College, Gordon Keith Chalmers, brought one of the nation's most distinguished poets and critics, John Crowe Ransom, to the Gambier Hill. Chalmers brought Ransom to Kenyon College to create a distinguished literary review. With its first appearance late in 1938, The Kenyon Review would become one of the most influential and honored literary magazines in America. Among the authors Ransom published during his two decades as editor were Robert Penn Warren, William Empson, Flannery O'Connor, Doris Lessing, Robert Lowell, and Randall Jarrell. The Kenyon Review also became closely identified with the "New Criticism," a method of interpreting literature that influenced succeeding generations of readers and teachers around the world. (Continued other side.)" 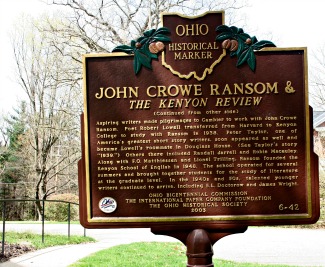 "(Continued from other side.) Aspiring writers made pilgrimages to Gambier to work with John Crowe Ransom. Poet Robert Lowell transferred from Harvard to Kenyon College to study with Ransom in 1938. Peter Taylor, one of America's greatest short story writers, soon appeared as well and became Lowell's roommate in Douglass House. (See Taylor's story "1939.") Others there included Randall Jarrell and Robie Macauley. Along with F.O. Matthiessen and Lionel Trilling, Ransom founded the Kenyon School of English in 1948. The school operated for several summers and brought together students for the study of literature at the graduate level. In the 1940s and 50s, talented younger writers continued to arrive, including E.L. Doctorow and James Wright."

The Marker is located at