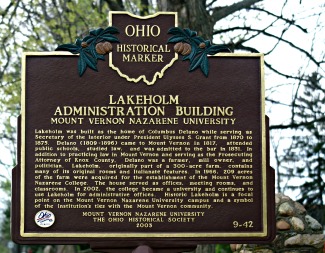 The beautiful farmhouse residence of Columbus Delano has now been preserved as the administrative offices for the Mount Vernon Nazarene University.

The text for both sides of the Marker reads:

"Lakeholm was built as the home of Columbus Delano while serving as Secretary of the Interior under President Ulysses S. Grant from 1870 to 1875. Delano (1809-1896) came to Mount Vernon in 1817, attended public schools, studied law, and was admitted to the bar in 1831. In addition to practicing law in Mount Vernon and serving as the Prosecuting Attorney of Knox County, Delano was a farmer, mill owner, and politician. Lakeholm, originally part of a 300-acre farm, contains many of its original rooms and Italianate features. In 1966, 209 acres of the farm were acquired for the establishment of the Mount Vernon Nazarene College. The house served as offices, meeting rooms, and classrooms. In 2002, the college became a university and continues to use Lakeholm for administrative offices. Historic Lakeholm is a focal point on the Mount Vernon Nazarene University campus and a symbol of the institution's ties with the Mount Vernon community."

The location of the Marker is on Route 586, at the southeast edge of Mount Vernon.