Knox County is Right on the Money!

There cannot be very many counties in the United States that can point to even one of their citizens appearing on U.S. currency, let alone two, and if you are willing to stretch the point a little, even three or four!

The first of these is the great-grandfather of the noted Hollywood actor, William Windom.

The Honorable William Windom was born in Belmont County, Ohio, on May 10, 1827. 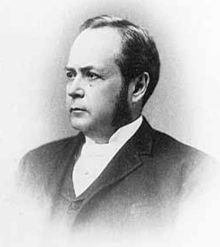 In the autumn of 1832 he came with his family to Middlebury Township in Knox County, where he was educated in the schools of the county, including the highly-recognized Martinsburg Academy which offered advanced studies to area students from 1838 to 1860. Young William Windom then entered the office of Judge Rollin Hurd as a law student, and in 1850 he was admitted to the bar. In 1851 he became a partner in the firm and when Judge Hurd was elected Judge of the Court of Common Pleas in 1852, Hurd surrendered his entire practice to Windom and Daniel S. Norton, Jr. Windom was soon after elected Knox County Prosecuting Attorney in 1852 on the Whig Party ticket.
Historian N. N. Hill described Windom as "... a young man of excellent talents, good habits, exemplary deportment and ranked well among the promising young lawyers of Mount Vernon. ... Mr. Windom was widely and favorably known as a zealous and able advocate of temperance in general and of laws prohibiting the sale of intoxicating liquors. He held a high position in the ranks of the temperance hosts of the State, and while yet quite young, he was chosen as the chief officer of an order known as Sons of Temperance. He served in this position not only acceptably, but also quite efficiently, making many public addresses and in various ways laboring to promote temperance and good morals."
In 1855, Windom 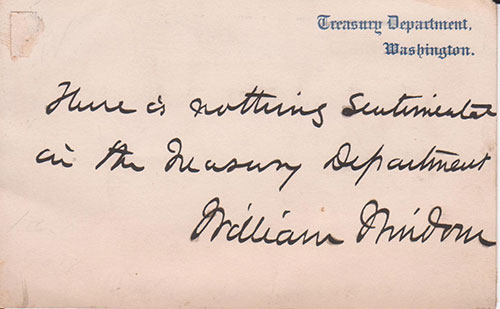 and Norton moved their law practice to Winona, Minnesota Territory, just three years before statehood. In 1859, Windom was elected to the thirty-sixth U.S. Congress while Norton was serving in the House and Senate of Minnesota, and then the U.S. Senate in 1865. Upon Daniel Norton's death in 1870, William Windom was appointed to complete the Senate term of his friend and colleague, then went on to be elected to serve two additional terms in the U.S. Senate.
William Windom was appointed Secretary of the Treasury and served in that post through the brief Presidency of James Garfield during 1881. He then practiced law in New York City until he was again appointed Secretary of the Treasury in 1888 by President Benjamin Harrison, where he served until his death, on January 29, 1891.
After his death, Knox County's William Windom was honored for his Treasury Department service by having his engraved portrait appear on the newly-issued $2.00 silver certificate of 1891,

which was in general circulation from 1891-1896.
Future installments here will describe several other Knox Countians who have appeared on American currency, including the brother of a famous General as well as Philander Chase's nephew and a prominent member of Abraham Lincoln's cabinet.