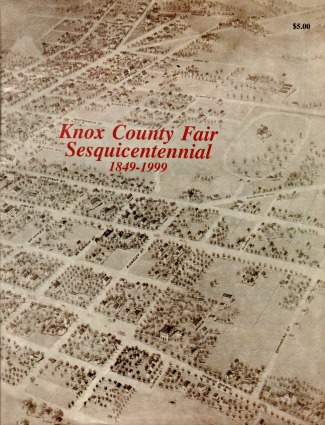 The finished 52-page publication featured both color and black and white photographs, newspaper accounts and other highlights from nearly all of the fairs, plus rosters of all fair board and junior fair board directors and members, county commissioners and OSU extension staff for every five-year period from 1849-1999.

A great deal of time and research also went into compiling an original brief written history of the fair from its earliest time, which was included at the beginning of the publication. In recent years, "adapted" versions of this history have appeared here and there online without attribution or authorship.

The original article covering the 150-year history of the Fair as it appeared in the full publication is reprinted below, and the complete 52-page booklet, The Knox County Fair Sesquicentennial: 1849-1999, is available for sale elsewhere on this website.

A Brief History of The Knox County Fair

In compiling this 150-year story of our Knox County Fair, it was inevitable that discrepancies would occur in the accounts of historical activities, newsworthy events, and the dates on which they occured. Information has been gathered from both early and recent published histories of the county, as well as various newspapers of our area during the 150-year period. The detailed research of James Robert Hopkins has been especially helpful in resolving both major and minor differences among earlier publications in presenting this story for our Sesquicentennial Celebration of The Knox County Fair.

By 1820, Knox County's population had reached 8,000, and by the end of the 1840s more than 28,000 persons were engaged in farming, trapping, milling, business, industry, house-keeping, child-rearing, and many other occupations. In the winter of 1846-47, a group of farmers formed the Morris (Township) Agricultural Club, and in November of 1847 they held a one-day fair on the farm of William Bonar, displaying grains, fruit and livestock. From this simple beginning came the organization now known as The Knox County Agricultural Society, which held its first county-wide fair on October 23 and 24, 1849. From its earliest days, the Society was dedicated to "encouraging the improvements of farm products, including farm stock of all kinds, and the products of domestic industry and skill - in short, all that pertains to rural comfort, convenience, and elegance, as well as the products of the skilled artisan and mechanic." 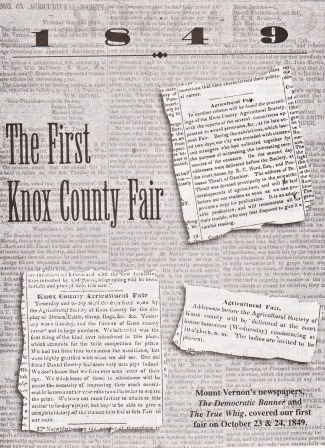 N.N. Hill's historical accounts of the fairs of 1849 - 1856 describe the variety of locales for fair activities, including the court room of the court house, which was then located on the northwest corner of the public square. Other fair activities were held at various church facilities, as well as the lot opposite the present jail on E. Chestnut St., and the property of Daniel S. Norton on West High St., near the present Moose Lodge.

In their 1857 Report to the State Board of Agriculture, our Society described their plans to expand the activities of the Knox County Fair in this way:

"We have been struggling for existence several years, and until the present year (1857) have not had what might be called an agricultural fair. The executive board of the past year determined to make a bold movement, and with little encouragement and no means, purchased 10 and three-quarter acres of land for a fairground for two hundred and twenty-five dollars per acre, enclosed it in a board fence, erected permanent halls, stalls, pens, etc., and two temporary halls and offices. The county commissioners agreed that when the Society had expended and paid upon it one thousand dollars they would appropriate a like amount.

"The fair was a successful one, and a great deal of good has resulted from it. It has breathed new life into the Society, and we think that the Knox County Agricultural Society and fairs have become a fixed fact. There were over six-hundred entries, made of horses, cattle, sheep and hogs, mules, fowls, farming implements, grain, vegetables, fine arts, needle and fancy work, domestic manufactures, painting, fruits, flowers, etc."

The new ten-acre fairground, built in 1857, was located on a site bordered by Coshocton Avenue on the south and Plimpton and Harkness (now Pleasant St.) to the north. Present-day Clinton and Park Streets mark the eastern and western edges of the grounds. In 1858 there were more than 700 entries at the fair, and in addition to the Society officers, the executive committee was allotted one member from each township of the county. The Society itself boasted five hundred members, and at the close of the 1858 fair a subscription of $1000 was raised to purchase additional ground to expand the fairgrounds even more.

By 1860 the Knox County Agricultural Society had nearly doubled its holdings to nineteen acres of ground, surrounded with an eight-foot high board fence enclosing the new stalls and other buildings as well as the splendid new half-mile track. But with the onset of the Civil War in 1861 and its continuation until 1865, attendance at all county fairs, including ours, declined dramatically, and it is likely that no fair was held here in 1864-65. In addition, considerable damage was done to the fairgrounds in 1863 when occupied by the Forty-third Regiment of the Ohio Volunteer Infantry. A committee which included Samuel Israel and Columbus Delano was appointed to collect for the damages from the U.S. Government.

At the end of the Civil War the Society was heavily in debt, but the new officers, board members, and citizens put on a successful fair in 1866, with sufficient proceeds to pay all premiums and expend large sums to repair the grounds and buildings. Now on firm financial footing, the fair again flourished throughout the late 1860's and 1870's. In 1869 a new Floral Hall was constructed at a cost of $3000 and was decorated by the ladies of the Society. The fair of 1872 had over one thousand entries. But pressures were being exerted by citizens and city council alike to sell the fairgrounds for expanded housing development in the area. Present-day Park, Clinton and Pleasant Streets, as well as Sugar, Hamtramck, and Burgess Streets were prime real estate for new housing. In 1872 a committee was formed to consider selling their land and to examine area farms for possible purchase by the Society for a new fairgrounds. Much discussion was held on this topic for several years, but the large majority of the Society and citizens did not favor the relocation of the fairgrounds, and little was done until the early 1880's. 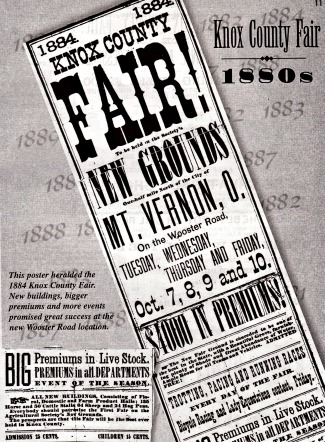 But in 1882 the Society sold the in-town fairgrounds to realtor John S. Braddock for housing and commercial development. In 1884, they purchased from three owners 45 acres of farmland which was the beginning of the present-day fairgrounds. But within ten years the Society found itself in considerable financial distress, and like other Ohio farm organizations during this period, the Knox County Agricultural Society "went under" due to a lack of interest and support. In 1894, a Utica bank foreclosed the property, which was purchased at the October public sale by P.B. Chase and soon developed into the summer entertainment center and resort known as Lake Hiawatha Park. As a partner in the Mount Vernon Street Railway Company, Chase extended his streetcar service from downtown to the Park, making it both convenient and inexpensive to visit.

The years from 1894 to 1928 represented both good times and bad for the Society. Between 1894 and 1908, land was leased at Hiawatha Park for the week of the fair, or the fair was held at a park and track just across from nearby Camp Sychar. In 1908, the Agricultural Society became revitalized and in 1918 was able to repurchase the now-bankrupt Hiawatha Park. But in 1924 they were forced to sell it again, retaining rights to lease the grounds for fair week from the new owners, who were affiliated with the Ohio Ku Klux Klan. Finally, in 1928, the present fairgrounds were purchased by the Knox County Commissioners for $9000 and have been owned by the county since that time. 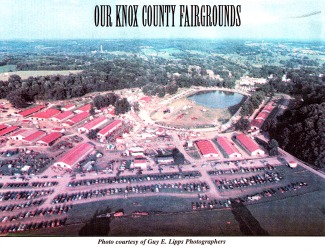 During the past 70 years the Knox County Fair has continued to grow steadily, adding new buildings, activities and nationally-known entertainment on a regular basis. The new grandstand was erected in 1932 through a contract with The Mount Vernon Bridge Company.

An outstanding "Centennial Fair" was held in 1949 which celebrated 100 years of fair activities in Knox County. The Junior Fair has become increasingly important during this period as well, providing a wide variety of opportunities for Knox County's young people to participate in worthwhile educational and recreational activities throughout the year. Students complete their experience by exhibiting projects during fair week.

In the early 1980's, several persons interested in preserving artifacts of area farming and rural life organized the Knox County Agricultural Museum on the fairgrounds. Its many supporters have helped this Museum to grow steadily over the past 15 years, expanding the main building and bringing a log house and one-room schoolhouse to the Agricultural Museum site, which attracts thousands of visitors during fair week and other times throughout the year.