In the year 1800, Ohio's many new settlers were reaching toward the 60,000 population required for Ohio's entry as our 17th State, which occurred in March, 1803. Soon the land that would become Knox County was being occupied by individuals and families from Pennsylvania, Maryland, Virginia, and other states. John Chapman, later known as Johnny Appleseed, arrived in time to vote in Mount Vernon's first election, about 1806.

Our first towns were established at Clinton and Mount Vernon, followed shortly by Fredericktown, Danville, and Houck's Settlement, near Centerburg. By 1825 there would be 12 post offices within the county.

Our first and second courthouses were built during this period, and Captain Joseph Walker led a Company of Knox County men into service in the War of 1812. Trouble with Indians was a constant concern at that time, especially in Richland County, which was a part of Knox County until 1813. 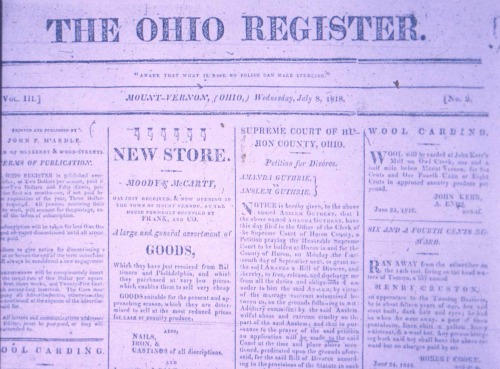 Our first weekly newspaper, the Ohio Register, began at the town of Clinton in 1812 and relocated to Mount Vernon a few years later, about the same time that the short-lived Owl Creek Bank opened its doors as one of the many "wildcat banks" that operated without a state charter for a brief time in Ohio.
Daniel Decatur Emmett and Mary Ann Ball (Mother Bickerdyke) were born here during these years, and our first schoolhouse was set up near the Mount Vernon Public Square for the few early pioneer children of the town.
The Owl Creek Baptist, St. Luke's Catholic, and Presbyterian churches were established early on, soon to be followed by others of many faiths. By 1825 our population was above 2000, and Knox County had been divided into nearly all the 22 townships that we have today.