When Knox County was established in 1808 it was divided into four large townships - Wayne, Clinton, Morgan and Union.

As more settlers arrived it became necessary to subdivide these into smaller townships, and by the year 1838 all of today's 22 townships had been established, plus the three north of Centerburg that were "stolen from Old Knox" in 1848 to become part of the newly formed Morrow County. 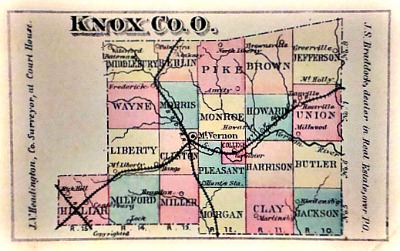 You can learn even more about many of our towns and townships in the stories below.

Dr. Richard Hilliar was one of our early residents and landowners in Knox County. His name is remembered both for the community of Rich Hill and for our township that bears his name at the southwest corner of the county.